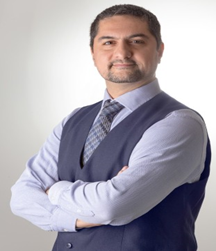 Shervin Shirmohammadi (M ’04, SM ’04, F ’17) received his Ph.D. in Electrical Engineering in 2000 from the University of Ottawa, Canada, where he is currently a Professor with the School of Electrical Engineering and Computer Science. He is the Director of the DISCOVER Lab, doing research in measurement methods and Applied AI for multimedia and networking systems. The results of his research, funded by more than $26 million from public and private sectors, have led to 400 publications, 3 Best Paper awards, over 70 researchers trained at the postdoctoral, PhD, and Master’s levels, 30 patents and technology transfers to the private sector, and a number of awards. He is the Editor-in-Chief of the IEEE Transactions on Instrumentation and Measurement, and was also the Associate Editor-in-Chief of IEEE Instrumentation and Measurement Magazine in 2014 and 2015, and is currently on its editorial board.

He has been an IEEE IMS AdCom member since 2014, and served as the Vice President of its Membership Development Committee from 2014 to 2017, and a member of the IEEE I2MTC Board of Directors from 2014 to 2016.

Dr. Shirmohammadi is an IEEE Fellow for contributions to multimedia systems and network measurements, winner of the 2019 George S. Glinski Award for Excellence in Research, a Senior Member of the ACM, a University of Ottawa Gold Medalist, and a licensed Professional Engineer in Ontario.

Like any science and engineering field, Instrumentation and Measurement (I&M) is currently experiencing the impact of the recent rise of Applied AI and in particular Machine Learning (ML). In fact the relationship between I&M and ML has reached new levels: I&M is used to collect data, which is used to train an ML model, which is then used in a measurement system. Uncertainty is accumulated at every stage, and quantifying it is crucial. But I&M and ML use terminology that sometimes sound or look similar, though they might only have a marginal relationship or even be false friends. Therefore, understanding the terminology used by both communities is of crucial importance to understand the influences of ML and I&M in each other. In this talk, we will give an overview of ML’s contribution to measurement error, and how to avoid confusion with the said terminology in order to better understand the application of ML in I&M. We then use that understanding and terminology to show how to quantify the uncertainty introduced by ML in a measurement system, and we go over some specific examples in imaging.