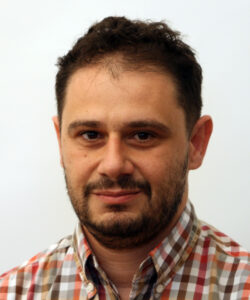 Lazaros Nalpantidis is an Associate Professor of Robotics & Autonomous Systems in the Department of Electrical Engineering, Technical University of Denmark (DTU). Before, he was an Associate Professor of Cognitive Robotics at Aalborg University Copenhagen, Denmark, where he also served as Head of Section for Sustainable Production within the Department for Materials and Production. He holds a B.Sc. (2003) in Physics and a M.Sc. (2005) (with Honors) in Electronic Engineering from Aristotle University of Thessaloniki, Greece. He received a Ph.D. (2010) in Robotic Vision from Democritus University of Thrace, Greece. He has been a post-doctoral researcher at the Centre for Autonomous Systems (CAS), Computer Vision & Active Perception Lab. (CVAP) of the Royal Institute of Technology (KTH), Sweden. Lazaros organized and chaired the 10th International Conference on Computer Vision Systems (ICVS 2015) in Copenhagen, co-organized various workshops on Cognitive Robotics, and has served as editor and guest editor in various journals on robotics and robot vision. He has been involved in numerous research projects funded by the European Commission, European Space Agency, as well as Greek, Swedish and Danish states.

In this talk I will discuss about what defines an Autonomous System and how research can pave the way towards Autonomous Robots. Robustness is essential for real deployment of such systems. One way of improving robustness is through properly trained deep learning perception models and automating the process of image annotation can support this direction. I will present concrete examples from ongoing projects in our research group where automating the annotation process has been beneficial for Autonomous Systems’ operation.